CAES works in the process: the ambient air is compressed via compressors into one or more storage reservoir(s) during the periods of low electricity demand (off-peak) and the energy is stored in the form of high pressure compressed air in the reservoir(s); during the periods of high electricity demand (on-peak), the stored compressed air is released, heated by a heat source from the combustion of fossil fuels or other methods, and then the energy in compressed air (or post-combustion gas) is captured by turbines/expanders to generate electricity.  CAES shows its distinguished merits, such as large-scale, low cost, long lifetime and the established operation experience. The below animation shows the whole process.

In addition to pumped hydroelectric energy storage, CAES is another type of commercialized electrical energy storage technology which can provide power output of over 100 MW with a single unit. A schematic diagram of a CAES plant is shown in the below figure. The world’s first utility-scale CAES plant, the Huntorf power plant, was installed in Germany in 1978. It uses two salt domes as the storage caverns and it runs on a daily cycle with 8 h of compressed air charging and 2 h of operation at a rated power of 290 MW. This plant provides black-start power to nuclear units, back-up to local power systems and extra electrical power to fill the gap between the electricity generation and demand. Another commercial CAES plant started operation in McIntosh, the US, in 1991. The 110 MW McIntosh plant can operate for up to 26 h at full power. The compressed air is stored in a salt cavern. A recuperator is operated to reuse the exhaust heat energy. This reduces the fuel consumption by 22–25% and improves the cycle efficiency from ∼42% to ∼54%, in comparison with the Huntorf plant. These two CAES plants have consistently shown good performances with 91.2–99.5% starting and running reliabilities. 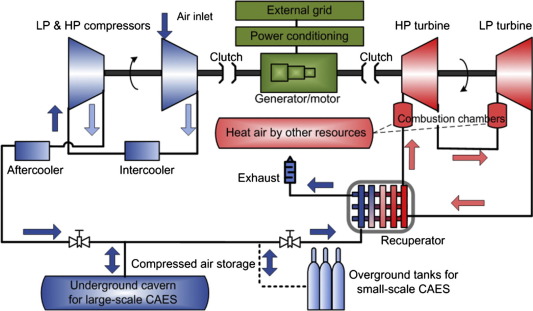 CAES system can be built to have small to large scale of capacities; CAES technology can provide the moderate speed of responses and good partial-load performance. The practical uses of large-scale CAES plants involve grid applications for load shifting, peak shaving, and frequency and voltage control. CAES can work with intermittent renewable energy applications, especially in wind power, to smooth the power output, which have attracted much attentions from academic researchers and industrial sectors. The major barrier to implementing large-scale CAES plants is identifying appropriate geographical locations which will decide the main investment cost of the plant. Relative low round trip efficiency is another barrier for CAES compared to PHS and battery technologies.

Currently, the newly developing Advanced Adiabatic CAES (AA-CAES) is attracting attention. AA-CAES technology is normally integrated with a thermal energy storage subsystem, which has no fuel combustion involved in the expansion mode. One AA-CAES demonstration plant – ADELE – is in the development stage but currently pausing, because of waiting for the local government's market policy, at Saxony-Anhalt in Germany. The plant will have a storage capacity of 360 MWh and an electric output of 90 MW, aiming for ∼70% cycle efficiency. Because its compression mode will be powered by wind energy, the ADELE plant emits no CO2 in a full cycle.  In 2007 Luminant and Shell-Wind Energy proposed wind farm projects involving CAES in Texas, intending to evaluate the potential of incorporating CAES facilities in conjunction with the wind farm; after a long wait, in 2013 the project got underway and hosting 317 MW of CAES has been set as the current target. Gaelectric Ltd. is currently seeking sites to building large-scale CAES plants in the Northern Ireland and England.

Apart from adiabatic CAES, the US based LightSail Energy Ltd. is now developing the technology which can complete the whole CAES operation close to the ideal isothermal process, by using reversible reciprocating piston machines.

Recently, apart from using salt caverns, researchers have attempted to study other geological structures for use in underground CAES technology. A 2 MW field test program has used a concrete-lined tunnel in an abandoned mine in Japan. A test facility made by Electric Power Research Institute and others utilized a hard rock cavern with water compensation. Italy’s Enel operated a 25 MW porous rock based CAES facility in Sesta – the test was stopped due to a disturbed geothermal issue.

Overground small-scale CAES has recently undergone rapid development. It can be used as an alternative to the battery for industrial applications, such as Uninterruptible Power Supplies (UPS) and back-up power systems. Compressed air battery systems developed by the UK based Flowbattery (previously named Pnu Power) were recently successfully commercialized. It uses pre-prepared compressed air from air cylinders to drive a combination of a scroll expander and a generator to produce electricity. Also, the feasibility on the direct mechanical coupling of a wind turbine and a scroll expander with small-scale CAES has been studied by the University of Warwick.